The first Earth Day, April 22, 1970 grew from a rising awareness of the need to protect the environment from the pollution of industry. It started nearly a decade earlier in 1962 with Rachel Carson’s book Silent Spring calling attention to

the effects of pesticides such as DDT on all living things, including people. The practices of the Industrial Revolution produced smoke-filled air, polluted lifeless rivers and toxic waste dumps. The prevailing attitude was that “the solution to pollution is dilution” but by 1970, the environmental laws enacted in the early 1960s had not yet made much effect, and a series of tragedies in 1969 brought sharper focus on the need for a stronger system to defend clean air, safe drinking water, fertile land, and the biodiversity of species. The Cuyahoga River in Cleveland, Ohio caught fire and burned down two bridges; an oil tanker ran aground and contaminated the beaches of Santa Barbara; and a spill from a DDT manufacturing plant caused a massive fish kill in the Mississippi River.

From this concentrated spate of outrages, Senator Gaylord Nelson (D) Wisconsin, called for a day of “teach-ins” on Earth Day to raise awareness and call for public action to protect the environment more systematically. There were public seminars in the streets, in union halls, in university courtyards and churches all across the country. Millions of people came to listen, to march and to protest. The result of this effort finally led to the creation of the Environmental Protection Agency, signed into law by Richard Nixon in 1974. It took more than a decade for the alarms Rachel Carson raised to see fruition in a legal apparatus to protect our life support system- fresh air, clean water, fertile ground and the biodiversity of species – the interconnected web of life of which humans are but one part.

In the years since those early days of concern for protecting the environment, a continuous erosion of the power of environmental laws has made its way through amendments, exemptions, and revisions of the laws. Industry has a larger say in the approval of new pesticides, herbicides or synthetic products. Entire industries such as hydraulic fracturing for oil and gas are exempt for seven federal environmental and worker safety protections. The regulatory review process has become so complex that only experts and teams of specialized attorneys can successfully navigate the labyrinth. Regulatory agencies at both federal and state levels have suffered from continuously shrinking budgets, required to do more with less.

More insidiously, industry interests have infiltrated the administration of the regulatory process, to shape the outcome for maximum economic effect, rather than maximum public or environmental health and protection. Doubt, reasonable or otherwise, has replaced reasoned judgment based on the facts of science. Opinion has replaced evidence based on observation and measurement, and political rhetoric has replaced peer-reviewed assessments. President Trump has 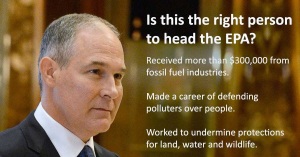 overtly rejected science as a basis for sound public policy. His appointed, and Senate confirmed, administrators vow to deconstruct the regulatory protections for the environment, for addressing climate change, and for protecting public health and worker safety. His Executive Orders in the first 100 days of his tenure illustrate the ardor of his passion for destruction of all that holds the living Earth dear. National Wildlife Refuges, National Parks, public lands – the legacy of our nation to the future- all fall to the greed of exploitation. The natural resource capital of the nation is squandered for short term corporate profits, while the public taxpayer pays the costs in the form of worse health from air and water pollution, costs for cleaning the public water supplies, or fighting wildfires, floods or droughts from climate change.

Rachel Carson provides a role model for a responsible scientist. She carried the revolutionary passion that all living things have the basic right to exist! She spoke for the unborn 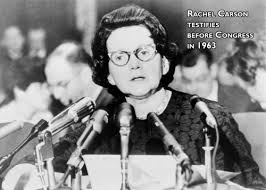 of future generations. She spoke for the oceans, forests, grasslands, winged creatures and soil dwellers- the great interconnected web of life. In her testimony to Congress months before her death, she called them to account: “Our heedless and destructive acts enter into the vast cycles of the earth and in time return to bring hazard to ourselves.” This living Earth is the precious hallmark of our planet. This unique living mantle of the Earth evolved to a finely tuned balance over 7,000 years, resting on millions of years of evolution before then. Humans have now strained the limits of the natural systems that keep the living Earth in balance. We see the evidence in the rising levels of carbon dioxide in the atmosphere, the consequent acidification of the oceans, rising global temperatures with the consequent melting of glaciers, expansion of drought areas, and more frequent extremes of storm events. Scientists observe, document and measure. We model the possible outcome and attempt to predict what has never happened before in recorded time. We wring our hands, and preach to each other. The journals are filled with data and documentation of ever more dire forecasts. And Trump became President!

We march in protest of his policies. We rise in rage at the folly of ignoring the facts, and despair for our children, and the unborn of all creatures whose fate we shape with our actions today. But, in the mainstream media, nobody reports on the peer-reviewed science. No media cover the extinction of a

Monarch butterfly and other pollinators under threat

species, or the effects of destroying the coral reefs, home to 30% of the fishes in the ocean. Ordinary people do not
automatically make the connection between rising global temperatures and the fate of our life support system. People do not make the connection between the death of pollinators and their own lives. They do not read peer-reviewed journals. Why would they?

We who stand as scientists with fists raised in outrage have enjoyed the freedom to pursue intellectual curiosity to the ultimate end of finding truth. We who know have the obligation to inform. Not in a pedantic way, which we can impart through our students. But in the vernacular. In the media. At our dinner tables. In the classrooms and PTA meetings where our children are. In the playgrounds, and on the sidelines where the coaches gather for soccer games or track meets. We need to be in the churches and community centers where people struggle with keeping whole in the face of adversity of all kinds. Science matters in everyone’s daily life. Where are the Teach-ins about climate change? Where are the street theater demonstrations of the better path forward? Where are the scientists at the tables where political decisions are being made? The ivory tower is not where we live. The community needs engaged scientists. The halls of

Congress need our voices, as constituents, as experts, and as opinion leaders holding them accountable for their decisions. We need to take the truth to the streets and teach people across all levels to know the difference between manufactured doubt and established facts.

At this pivotal time in history, it is our obligation to speak out. To make our voices heard and to listen to the fears that underlie the obstruction. We are a country that strives for freedom- in markets, in personal pursuits, and in opinions. But freedom without responsibility yields chaos. We are a nation governed by laws, but when the laws are corrupted by greed and protections for private interests over the public good, we have the obligation to speak out, to protest and to demand accountability. The laws of Nature are not negotiable. The path we have set upon with economic profit as the primary determinant of value sets us on a path of certain destruction. Our life support system is being destroyed, and our economy registers only more jobs, more sales for extracted resources, more profits from plundered land. Unless we protect the common necessities for life to exist, we will leave a legacy of an uninhabitable planet. Scientists engaged in the debate, professing hope through better solutions, teaching the ways of life based on the laws of science can shape a better future. We who know have the obligation to act. We who see better options based on facts have the power to change the world. We must reach out beyond our comfort zones. We must invite people in to knowing the facts science can bring to the wonders of our fragile and marvelous living Earth.