My morning walking meditation includes listening acutely for the songs of birds in the garden as I sit and mediate after “seven count stretches.”  The late August morning is filled with the twitter of goldfinches busy in the thick seed pods of the redbud tree, the noisy flock-let of young cardinals plaguing their mother for attention, the noisy calls of the blue jay brothers, and the chatter of chickadees and the tufted titmouse. Suddenly all are still and silent as the Coopers hawk flies overhead and perches in the pin oak above the garden.

I shift my focus to the air, warm and soft with humidity at this early hour, suffused with the aroma of the newly opened gardenia blossom near my seat. The wind shifts, and my senses are instead assaulted with the sharp smell of sulfur and the acrid scent of coal burning from the plant just over the hill.  The smell brings a faint echo of the oppressive smog of my youth when the coal burning furnaces heated the houses, drove the factories and filled the skies with plumes of black smoke, dimming the noontime sun. 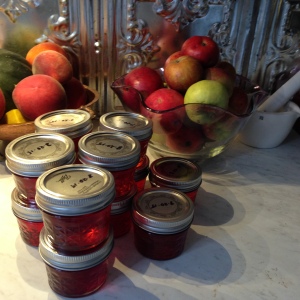 Those hot summer days were filled with the chores of harvesting the bounty of the summer gardens and putting up jars for the winter.  Washing the cinders off of the vegetables was the task of young ones of us, and I can remember the black water that we threw back on the ground from the washing buckets.  How much of that particulate matter ended up in our food?  in our lungs? The lace curtains washed every week and thoroughly bleached then set to dry on the pin frame stretcher eventually assumed a gray cast as the coal dust worked its way into the fibers.  I consciously displace that memory with the more important one of feeling the sense of community in the shared work.  My grandmother, mother and Auntie as well as my cousins all had tasks in preparing the tomatoes for the large vats of sauce that would become Sunday spaghetti dinners for the family all year long.  The overabundance of zucchini, peppers, onions and tomatoes became rattatouile packed in quart jars to serve over polenta. The peaches, pears, apricots and plums all were pared and quartered into jars, or turned into jam.  The whole operation was fueled by the big black coal stove in the cellar.

The echo of that time past leaves me with a sense of longing for the dear ones now gone, and those shared experiences of the dignity and satisfaction of shared work. I pack the recollections into my jars and pass them on.