Water defines our planet. As seen from space the blue globe is 70% water at the surface, including the ice packs at the north and south poles and the swirling clouds of vapor that course over the surface. The cycle of water from liquid to gaseous to solid states circulates and connects all parts of the globe and interconnects all of the living things on earth.  Our ancient origins in the primordial sea reflect in the salty composition of the blood and intersticial fluids of living organisms from bacteria and single celled organisms to complex plants and animals. We depend on water for life.

Human populations have centered in places where surface waters can provide transportation as well as water for growing food and sustaining living conditions. Technology advances have allowed the spread of human habitation into areas that have been normally dry or desert conditions by pumping from deep aquifers or bringing irrigation from long distances by pipes and channels to divert rivers or capture snow melt.  The advance of long periods of drought have disrupted cultures and settlements frequently over the recorded history of humanity.  New theories about the fall of the Mayan culture are based on a prolonged drought- 200 years or so in duration- based on findings of fossil pollen residues found from that period. Will we see in our time massive realignments of cultural settlement patterns in response to drought and climate changes?

I attended the AESS meetings in San Diego California in the last week of June.  They have been experiencing a drought for four years, with this May a cooler wetter month than usual.  I walked in the Torey Pines City Park, outside the bounds of the watered 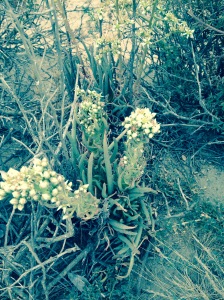 central campus of University of California San Diego to see what the landscape looks like.  In place of the deciduous woods of Pennsylvania that I am familiar with,  I found the ancient layered sandstone canyon covered with succulent vegetation- all looking parched and dusty to my eye.  The early morning mist that rose from the pounding surf settled among the growing plants, providing moisture from the air.  The brush was busy with the lively birds flitting in and out.  I saw small lizards sitting on rocky ledges, and footprints of animals in the sand – perhaps raccoons, or mice.  I have not studied the flora and fauna of this area, but notice that the ecosystem here is quite different, shaped by water as a very scarce part of the habitat.

As i sat on the steps, out of breath, I watched the ocean crashing against the cliffs sending a fine spray into the air.  I began to notice that the plants here are designed to absorb moisture from the air, and store it in swollen leaf structures for times when it is lacking.  Even in such moisture constrained places, the fragile flowers attract bees and other pollinators.  I know there is a complex ecosystem thriving here, separate from the human engineered grass and rose bush adorned plantings that survive only from nightly irrigation.

We can take lessons from examining the adaptations to different habitat conditions. How can we prepare for greater resilience in the face of the inevitable changes in our climate?

One thought on “Perspectives on Water”