As most of America sits down to a “traditional Thanksgiving Dinner” on Thursday, the Standing Rock Sioux people will be holding ground between the Dakota Access Pipeline construction equipment and the shores of Lake Oahe, a part of the Missouri River that serves as the only water supply for the Standing Rock Sioux Reservation about a half mile away. The Missouri River is the longest River in America, and serves over 160 million people for domestic, commercial and agricultural water supplies.

The Dakota Access Pipeline is intended to carry 450,000 gallons of crude oil per day from the Baaken Shale Oil fields to a refinery in Illinois. It has been under protest from the Standing Rock Sioux since April because of failure for the developers or any governmental agency to confer with the Tribe, as required by treaties established over a hundred years; and because of concerns over the potential for oil spill contamination of the water supply.

The Standing Rock Sioux have petitioned for an injunction to halt construction , and President Obama has asked the Army Corps of Engineers to re-examine the issues they have raised, suggesting that the pipeline may be re-routed to avoid the intrusion into Tribal areas. However, while deliberations are pending, construction has continued, and is now within less than a mile of the River. The protests and demonstrations have continued, attracting Police and Marshalls from the Morton County Sheriff ‘s Office. Suppression actions have proceeded in a most inhumane, brutal and unconscionable manner. As the Standing Rock Sioux have been joined by First Nations from around the country, numerous violations of human rights, constitutional rights and basic decency have occurred.

The Standing Rock Sioux position was explained by artist and tribal member Johnny Coe speaking to a gathering at Maren’s Sustainability Salon on November 12, 2016. “Our People are the Water Protectors. This has been the center of our culture for many generations. We stand between the construction equipment and the waters that give us life to prevent this danger.” He explained that the protection of a significant watershed from crude oil spillage from a 30 inch pipe intruding under the river speaks not only for the inhabitants of the Reservation but also for the life of the River itself, and the people who rely on its fresh water for miles downstream. “Crude oil and fresh water do not mix. The life giving waters must be protected from this Black Snake” (Sioux legend interpreted as oil pipelines)

The concerns are well-founded. The Energy Transfer Partners constructing the pipeline will turn over operations to Sunoco. “Sunoco Logistics (SXL.N), the future operator of the oil pipeline delayed this month after Native American protests in North Dakota, spills crude more often than any of its competitors with more than 200 leaks since 2010, according to a Reuters analysis of government data.” (http://www.reuters.com/article/us-usa-pipeline-nativeamericans-safety-i-idUSKCN11T1UW)

In addition, the same issues that supported the denial of the Keystone XL Pipeline from Canada down to the Gulf of Mexico pertain to this project. The rapid deployment of oil and building more permanent infrastructure to exploit it contributes to the build-up of greenhouse gas emissions causing climate change. The Army Corps of Engineers has taken this position: “The Army has determined that additional discussion and analysis are warranted in light of the history of the Great Sioux Nation’s dispossessions of lands, the importance of Lake Oahe to the Tribe, our government-to-government relationship, and the statute governing easements through government property.”

The pipeline is nearly complete, awaiting only this final Army Corps of Engineers Permit. In the meantime, the Morton County Sheriff Officers continue to suppress the protest.

A Call for Action in Support of the Standing Rock Sioux:

The most concerning aspect of this situation is the blatant violation of First Amendment rights of free speech. Protest on behalf of strongly held beliefs, especially those supported by legitimate claims for legal action, should not be suppressed by police action. The people have the right to protest, on their own land, to defend their water supply. Journalists attempting to report on the protests have been jailed. The mainstream media has been silent on this issue. (https://www.theguardian.com/us-news/2016/nov/03/north-dakota-access-oil-pipeline-protests-explainer ) 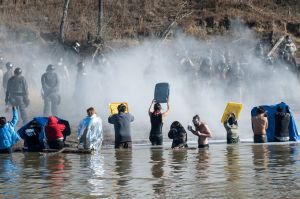 Third, the Standing Rock Sioux are willing to put their lives on the line to protect the river from a potentially dangerous installation. They are standing in principle against the injustice of placing corporate profits and convenience over the public interest in having secure fresh water supplies. This is an environmental justice issue perpetrated over centuries of abuse of First Nations’ rights.

This is an existential battle, not only for the Standing Rock Sioux but for all people. The hydraulic fracturing that has released the Baaken Shale oil is operating under the exemption of seven federal laws designed to protect the air, water and health of the public and workers. This exemption granted in the National Energy Act of 2005 opens all of America to the permanent degradation of the environment. Oxygen-rich air, fresh water, fertile ground and the biodiversity of species that constitute the interconnected web of life are our life support system. Laws designed to limit and prevent the destruction of our common needs must be resisted and replaced with protections in the public interest.

As we face a political power shift that favors even less regulatory protection for air, water and land, we must each decide where we will make our stand. I urge your support of the Standing Rock Sioux. They hear the screams of Mother Earth and choose to stand as Water Protectors. Join their call for survival, for compassion and for respect to our common Mother Earth.

Speak out to stop the violence while the courts plod slowly through their deliberations.

Call the Department of Justice and demand they investigate and charge the Morton County Sheriff’s Department for these life-threatening attacks on peaceful unarmed protectors immediately!

Sam Levin. “Dakota Access pipeline: the who, what and why of the Standing Rock protests” The Guardian. November 3, 2016. https://www.theguardian.com/us-news/2016/nov/03/north-dakota-access-oil-pipeline-protests-explainer