A Reflection on Songs of Struggle and Protest

On July 11, 2019, the Battle of Homestead Foundation presented Smokestack Lightning and Mike Stout for an evening of Songs of Protest and Struggle from labor and the environment movements.

The Historic Pump House is full to overflowing tonight. The sun has fallen below the thick cover of clouds that dumped four inches of rain in the late afternoon.  Now the golden light of sunset streams in shafts through the gloom like spotlights on the people standing in the doorway of the Pump House. The place is rocking with the music of Mike Stout and Smokestack Lightning. The ghosts of this place hang heavy here tonight as people stomp the dust out of these ancient floor boards.

As I listen to the songs of struggle and protest celebrating the men and women who led the fight for fair wages and safe working conditions and who fight today for our humanity and our Earth, the immigrant blood of my Father and all of my grandparents sings in my bones. Tears overwhelm me even as I dance (outside) in celebration of their lives and their struggles. It as clear as a lightning flash that this is the true greatness of America – the people – working men and women who dared to demand justice and rightness no matter the cost to themselves. Workers and advocates fought, and sometimes died, for the right to be treated with dignity and respect, for fair compensation for their sweat and blood and tears, and to protect the air, water and soil that supports us all. The America we know today came from this struggle for the middle class, the people who show up and get it done.

Solidarity makes us strong in the face of tyranny, and never have we needed to stand together and be strong more than today. The battle is upon us, all around us, urgent and inexorable. We look into the maw of oblivion every day. But this night, for a few hours, we stand together – workers, union organizers, environmental advocates, old people, little children- we stand together and sing “This Land Is Your Land, This Land Is My Land”… and “One Big Union.” We feel the solidarity of our shared humanity as the song rises and the sun sets. The hope instilled in this moment will carry us through the next battle together.

The fabric of our society is torn by hatred, frayed by distrust, and tattered by fear. But the basic structure of America is stronger than any in the world. The Constitution and the rights and obligations it details have stood for 240 years guiding a society governed by the consent of the people under the rule of law. The rights entailed in the Constitution have explicit or implied responsibilities which, taken together, represent a social contract that binds all citizens in a common journey. America was meant to be a government “of the people, by the people and for the people.” Unfortunately, this high aspiration has been subverted and corrupted by forces of greed and hatred.

The second Amendment of the Constitution “right to bear arms” does not intend the unprovoked slaughter of innocent citizens, nor the shooting of people in the streets over trivial altercations. When did it become acceptable to shoot first and ask questions later? Such evidence of the breakdown of the basic compact of a lawful society grows from frustration, inequity and fear.

The weight of corporate and special interests over the general public interest in political decisions is manifest in both the nature of laws adopted and in the blockage of laws that protect the public. One especially insidious example is the Energy Act of 2005, with its specific exemptions for hydraulic fracturing from the Clean Air Act, the Safe Drinking Water Act, the Resource Conservation and Recovery Act, and certain provisions of the Occupational Safety and Health Act. Justified by an “all of the above” energy strategy, this set of exemptions has exposed the citizens of 39 states to the environmental and health effects of fracking. As the “anecdotal” evidence continues to accumulate, people grow increasingly frustrated when the environmental regulatory authorities appear to do nothing. Communities face failure of water supplies; workers develop illnesses from exposure to harmful wastes and by-products; fracking facilities appear next to schools, residences and business districts. The power of a regulatory agency is limited by the authorization in the law, so when the law specifically exempts an industrial activity from regulation, the regulatory agency has no authority to curtail that activity. The influence of corporations such as Halliburton, with the specific influence of Vice President Chaney, pushed through a law that runs explicitly counter to the public interest. Now, corporate interests in developing deep shale fossil gas at the expense of public health and safe drinking water seems entrenched in national energy policy as a “bridge fuel” to an undefined future. A few get rich, many get sick or lose their homes.

Corporations have received increasing rights and power by the action of the court, most especially in the Citizens United decision issued in September 2010. This decision increased the ability of corporate interests to use financial influence in elections, directly and indirectly. As more weight of corporate and special interests prevent actions favored by large majorities of citizens, trust in the ability of lawmakers to respond to the needs of people continues to grow. Failure to adopt any form of gun laws in the face of escalating community violence is one example. Failure to address climate change in the face of growing evidence of current and future harm is another.

America touts its position as the land of the free and home of the brave. But, freedom requires responsibility. Freedom of speech includes the responsibility to listen with respect to other opinions. The right to bear arms for self defense entails the responsibility to ensure safe use, not an entitlement to perpetrate violence. Freedom unrestrained by accountability and responsibility for actions results in chaos. Solidarity and empathy among Americans as people in a shared journey makes us a great country. America’s diversity is our strength. The income inequities, frustration with corporate greed over public well-being, and fear for the future are the seeds of our destruction from within. Standing together to demand justice and equity, with compassion and respect for each other, and with concern for the children of the future will return power to the people. Our children lead in this struggle. I take courage and inspiration from the Woodland Hills Academy 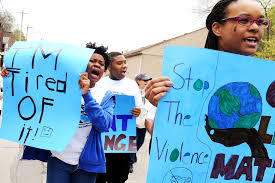 eighth grade students who organized a community march and forum “Guns and violence do NOT define US!” They deserve a better future.