May has arrived with a burst of blooming trees and borders, the return of summer birds and lawn signs touting candidates for the spring primaries.  While the latest round of community protest and violence unfolds in real time on television, people sit and make comments either cynical, sympathetic or outraged, depending on their own perspectives. We witness another symptom of society in distress, another plea for help.

I reflect on the differences between today’s protests and unrest and those of the late 1960s.  There are two observations that concern me here.  First, the challenge to authority is specific,not general, precipitated by specific confrontations between an individual and police. Second, the protests have no specific focus or call for action, no equal rights, war protest, environmental protection themes.  The eruption of community outrage and protest we see today marks the call for attention to communities where the advantages of modern time have not penetrated.  Major employers that offer entry level jobs with a career path to promotion are scarce, often leaving the rusting hulks of closed factories as reminders of former days. The communities are isolated physically and culturally from the mainstream of the wider society.  With unemployment in double digits from 14% to 25%, drug trade and other forms of desperation abound, education and public amenities like parks, youth programs, elder care, even basic things like grocery stores and shops are scarce or below par. More resources for policing do not solve such problems. The protests in Ferguson and Baltimore call out for basic human respect, for recognition, for attention and help.

A representative democracy requires the participation of all the people.  Organized protests on behalf of voter registration drives, and calls for elected officials to respond to the actual needs of people can be effective.  Government spending to rebuild the infrastructure of former manufacturing neighborhoods and training the people who live there to do the work would be helpful.  Empowering people to take initiative requires some investment of money as well as social capital.  People need to care about each other and restore a sense of common purpose.

This process can work when people care, receive support, and positive reinforcement.  I take for example the rebirth of the Hill District in Pittsburgh.  It has become a vibrant place full of cultural wealth from the Kingsley Center to the UJAMAA 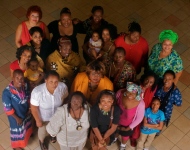 Collective. (See here some of the Sisters of the Ujamaa Collective visit at http://www.ujamaacollective.org/our-story/)

A restoration based on entrepreneurship and joint action, with urban farming and local investment now graces this area. Supportive policies from the City of Pittsburgh in zoning and community development policies help.  People have to care about each other, and make change a priority.

Democracy is NOT a spectator sport. A government of the people, by the people and for the people requires that the people participate in their own governance.  Get involved, and make the change you want to see happen.  Do what you can with what you have where you are.

I am running for Forest Hills Borough Council in my own town to help build a community that thrives in harmony with nature – equitable, robust, and beautiful. You can do it too.