The consequences of having a President who condones bigotry and disrespect have come to fruition this troubled summer of 2017. As White Supremacy rhetoric has become accepted as “free speech,” the moral fabric of America is shredded and all of us are more fearful and less secure in our homes, in our lives and in our communities. This violent bombast has obscured more substantive matters. Existential crises for which the possibility of consensus becomes increasingly elusive worsen while public attention diverts to the drama of domestic terrorism.

I view this tragedy of the Trump moral weakness through the lens of a visit earlier this summer to the Normandy World War II Memorial and the Omaha Beach where the U.S. and Allied forces landed in the summer of 1941 to turn the tide of the war against German Nazi armies. So many died there standing 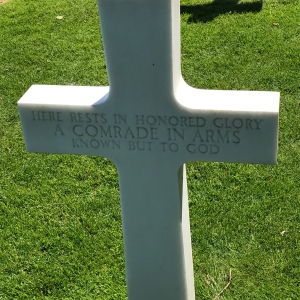 Here Lies A Comrade In Arms Known But to God 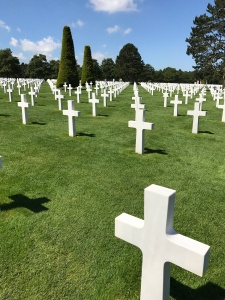 in defense of Freedom, a concept sharpened by the contrast in the Western world between the rampages of despot Adolf Hitler, striving for world dominance in the name of an ideology based on exclusivity and hate, and the Allied ideology of liberty, inclusiveness and freedom of belief. I found it instructive to revisit President Franklin D. Roosevelt’s 1941 State of the Union Address to Congress in which he called for a united stand against tyranny.

In this 21st century, we face global warfare of clashing ideologies, but we also face a common threat to the survival of life on earth from the cumulative effects of human enterprise on the environment and the life support system of the living Earth itself. WWII ended in a declared victory for freedom and a peace that lasted through diplomacy and mutual alliances until the verbal hostilities of the Cold War and arms race. Our nation in 1941 was “threatened from without” and confronted the threat of tyranny with a call for national unity and common purpose. Today we are a nation divided on lines of ideology as well as class, race and view of our role in the world. We are not united in purpose. While Roosevelt opposed the forces that argued for “enforced isolation behind an ancient Chinese wall,” our President is building walls, both physically and rhetorically dividing our nation from allies and presenting blustering threats on all sides. While Roosevelt called for leadership through “responsibility and accountability based on a decent respect for the rights and dignity of all nations large and small,” modern America looks at other nations as resources, markets or targets of opportunity for “deals.” Roosevelt wisely noted, “Enduring peace cannot be bought at the cost of other people’s freedom.”(1)

Roosevelt’s observations about democracy resonate to our time:

“There is nothing mysterious about the foundations of a healthy and strong democracy. The basic things expected by our people of their political and economic systems are simple. They are

Achieving these essential components of democracy in the 21st century can build unity of purpose. These are the true values of America that can unite us again. Achieving these freedoms requires that people accept responsibility as citizens to participate in the process of governing. It also requires that those elected to lead must be held accountable to a moral standard that puts the public interest first. Laws alone do not make a country great. It must be the priority of all citizens to protect and defend the basic things that allow all of the people to succeed.

In this current environment, the issue is still jobs. As we struggle to address the real and pressing dangers not to our nation alone, but to the very existence of life on Earth from global warming and global chemical pollution, we must provide for a just and equitable transition to a non-fossil based economy. This path is not only viable, but has proven productive of vibrant economic, social and environmental success.

The quadrennial National Climate Assessment, authorized by Congress in 1990, concludes: “It is extremely likely that human influence has been the dominant cause of the observed warming since the mid-20th century. For the warming over the last century, there is no convincing alternative explanation supported by the extent of the observational evidence.” (2) Denial does not change the consequences. The laws of Nature are not negotiable. It is time to accept reality and act responsibly for the sake of life on Earth and all future generations.

Those who see the past as a secure and comfortable condition are often lured by the romanticized myth of “the way it was back in the day” without admitting the reality of living and working in dangerous, polluted and debilitating conditions. Many came to America to better their fortunes and improve the prospects for their children. They endured harsh conditions and dangers to give their children better choices. The altruism of the laborers for their children built the wealth of America, secured by the organized labor movement pressing for fair wages and safety in the workplace. As the strength of unions has eroded over the last thirty years, the wealth has accumulated again in the top 1% of the population, abetted by government policies and the Citizens United ruling determining that corporations have the rights of “persons” under the law. Corporations are NOT people. They do not bleed. They do not feel love or joy or pain. A government controlled by multinational corporate interests does not act in the public interest to secure the conditions of democracy! 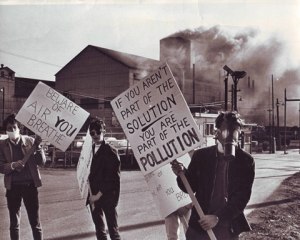 It is time to take the power of governance back to the people! It is time to recognize that the issue is still jobs. Providing good employment for willing workers to provide for their families is the function of the public and private sectors working together for the greater good of all. The trickle down theory has never worked except to enrich the privilege of the few. In the interest of long -term survival of our species, we must make a transition to new ways of running the economy. Establish value based on the natural capital of the living Earth and cease its exploitation and destruction. Convert energy systems from a fossil fueled economy to renewable and sustainable systems. Make products with green chemistry principles using components and processes that do not 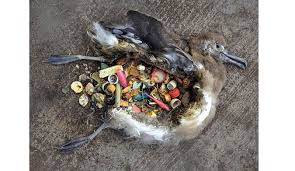 create toxic or poisonous products or by-products. Shift our chemical-dependent agriculture system to regenerative practices based on ecology that restore the fertility of the land and conserve water. These pathways offer the promise of shared benefits in economic opportunities, health benefits and environmental stability for another generation.

The Freedoms my father fought for in World War II will elude Americans of the 21st century if we cannot stand to defend the true values that can unite our nation to a renewed common purpose: to preserve a just and equitable future for those who have no voice at the table today. We must renew the altruism for the unborn and the living things of the Earth who depend on the wisdom of people today. It is only with care and foresight for the fate of the Earth that we will leave a legacy worthy of those who fought for our freedom. We must stand up to tyranny and demand accountability for the true freedoms that make America great. The Woodland Hills Academy seventh graders held a march on Earth Day 2016 to declare that “Guns and Violence Do NOT Define US!” We should heed their passionate leadership!